"An evening of great music, which made us dream, evoking infinite horizons in the imagination of each and accompanied by deep sensations and emotions. This is what the concert “Parole e Silenzi” (“Words and Silences'') by the acclaimed Mantuan pianist and composer Stefano Gueresi, had to offer at the boardroom of Palazzo del Podestà in Castell'Arquato.
Through the execution of his own works, Gueresi immediately began to transmit serenity, anticipating the organizers’ noble intentions, proof of the great emotional strength of music as a universal language. Songs composed by a contemporary yet in countercurrent with the atonal and dissonant inclinations of many of his colleagues, written in a very pleasant tonal style, in which his own personal imagination and inventiveness, though present and original, are always at the melody’s service. And then here is the beautiful "Il sogno di Penelope" (“Penelope’s Dream”), the romantic "I racconti del lago" (“Tales of the Lake”) and the enchanted, almost Chopinian moments of "La neve e l’amore lontano" (“The Snow and the Faraway Love”). In the pages written by Gueresi there is no lack of virtuosity, as it lightly emerges in every piece (emblematic in this regard the "Danza d’autunno" (“Autumn Dance”) and the final encore), but always in a calm and gentle way, almost as if the master did not want to break the spell of his music. Finally, to the applause of the public, came a sparkling encore, yet another proof of Gueresi’s great value."

Impressions of a listener

Ancient and modern melted together by nostalgia: if I had to choose a mixture of sensations to decrypt Gueresi's songs I would have no doubts. However, I would focus decisively on the strength of Nostalgia, understood as a feeling capable of evoking what you have lived or would have liked to live. Gueresi's music is loaded with this nostalgic force which should not be seen as a brake on innovation or as a ballast for inspiration.

Gueresi is not nostalgic in rhythms, in agreements or harmonies. No. Definitely not. He is not nostalgic. If anything, Gueresi's nostalgia is an inspiring force capable of creating fairy-tale backgrounds in musical contexts that you can feel real and present. I have above all a song in my head. “Il giardino di Madame Guesdom” (“Madame’s Guesdom’s Garden”). I don't judge it for the pleasantness (it would still be a subjective value), but for the winning combination between title (why not give importance to a title too?) and harmony.

The passage as a whole evokes, accompanies, does not dominate the thoughts of those who listen to it. Instead it suggests and lets us glimpse into a world within music that goes beyond music. Gueresi does not impose himself, he transports. In short, his music should be listened to to have fun entering this harmonic garden where baroque and modern merge in the name of nostalgia. His songs are musical tarots to be turned on the table of one's imagination.

Gueresi's is a kind of music that restores: you listen and you have the feeling that an environment, an atmosphere, a historical space are being rebuilt around us. Sound bricks that build an architecture. They are too beautiful pieces of music to serve as background. That’s a good reason to continue this way.

The Mantuan musician, trained at the school Elisabeth Muller Vivanti (for piano) and John Paynter (for composition), proposed a series of pieces composed by him (from “Il sogno di Penelope” (Penelope’s Dream) to “Danza d'autunno” (Autumn Dance); from “Le ali della notte” (“Wings of the Night”) to the final “I misteri del bosco di Norrhult” (The Mysteries of Norrhult Woods), characterized by an appreciable melodic vein with nostalgic and passionate accents: pages of clear late-romantic matrix, of undoubted evocative force and of unavoidable suggestion — also because well structured, according to the classic exposition-development-recapitulation scheme, always valid for this type of compositions — which are well suited for ballets and as a soundtracks for shows and documentaries (as already happened in 2000, in the context of the show "Mantova Danza"; and for the theatrical performance “Il Senatore Fox” by Luigi Lunari staged by the Campogalliani company, directed by Aldo Signoretti, in Vicenza).

The delicate “Budapest”, an encore piece (again composed by Gueresi) was performed and the applause paid by the attentive audience — present in the elegant auditorium — was long and insistent.

In the division of musical genres, Stefano Gueresi's work occupies the shelf reserved for dreams. And in a dream, you know, everything becomes possible. Thus his music opens the doors of a literary universe, leads into romance lands and lyrical paths. Just like dreams his music is impalpable and difficult to grasp, but it settles in the soul, it baffles it and awakens dormant areas. It dissolves certainties and moves thoughts. And sets us free in the end. We were conquered.

…for this reason, the recital by Maestro Gueresi, whom Testori would have called a "master of memory in a forgetful world", a master of that memory of a common destiny: past, present and future. A memory that lives in his classicist and very modern compositions at the same time, for their testimonial depth in the artistic panorama of a contemporaneity that mostly flaunts an ostentatious poetics of ugliness...

He was born in Mantua in 1960. On the talent wheel that day music chained him to an absolute and totalizing, as well as tormented, relationship — we believe we can guess — , at least until the expressive and technical maturity, acquired with remarkable earliness, the personal and human [maturity] added up. Nothing strange for an artist, sacred fire can burn, because however sacred, it is still fire. Since then, we’ve always proceeded by intuitions, this relationship has also become satisfactory while remaining totalizing. Gueresi thrives on music. He is a man of generous and bizarre nature: you can ask him at any time of any day or the year to take you to the moon or to help you straighten, with only the weight of your body, the tower of Pisa: he will immediately say an authentic and immediate "sure!”. But if you ask him out for an aperitif you will have to give him at least 24 hours notice, then he will extract from his back pocket a badly folded sheet which he calls, without any irony, "agenda" and will certainly say yes...

He is a man of contagious pleasantness and his undulating happiness moves on a backdrop of distant melancholy.

He is an artist and we support him here. 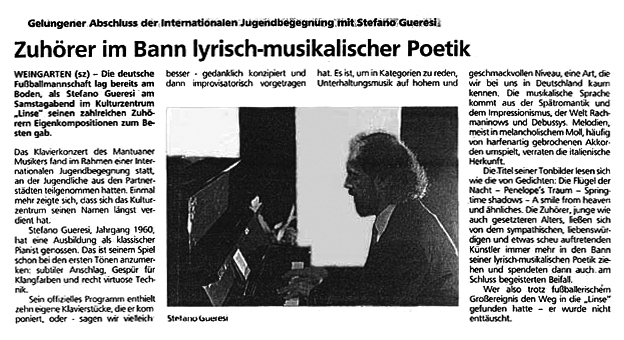 Italian pianist and composer Stefano Gueresi gave a concert at the House of Culture in Naberezhnaya Street on the occasion of the Imperial City Anniversary. Although Gueresi has played throughout Europe (Italy, Great Britain, Sweden, France, Germany, Belgium, Poland, Croatia, Switzerland), the Imperial City remains one of his favorite places to perform his works. Many people, interested in piano music and the creative work of this talented composer, met at the House of Culture. The audience followed the maestro's execution of the songs in absolute silence, and the interest was all in the hands of the musician. The magnificent music listened to will remain in the public's memory for a long time. The composer performed "Il vento dell’epoca oscura" (The Wind of the Dark Epoch”), "Il sogno di Penelope" (“Penelope’s Dream”), "Danza d’Autunno" (“Autumn Dance”), "Ritorno a Canterbury" (”Return to Canterbury”), "Ali della notte" (Wings of the Night), the suite dedicated to the Imperial City, in three parts: "Il valzer di Pushkin" (Pushkin’s Waltz), "Il presagio" (“The Omen”) and "La neve e l’amore lontano" (“The Snow and the Faraway Love”) and other songs.

Right after the concert Stefano answered some of our questions.

Stefano, thank you for your wonderful concert. People were captured by your music.
It is I who should thank you for the splendid audience and for the welcome Ist received.
It is the second time that you perform in our city. Will you come back again?
I really hope so. I would like to visit the Imperial City of Pushkin in the winter. I hope to do it sooner or later.
Do you like our city?
This city is wonderful. Here you can admire examples of great architecture, immersed in a fascinating natural setting. It is a dream city!
We look forward to your next visit. Thank you again for the beautiful concert. 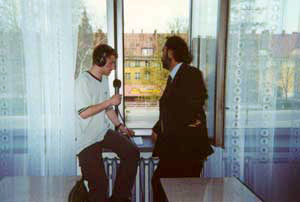 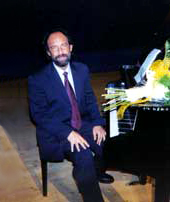 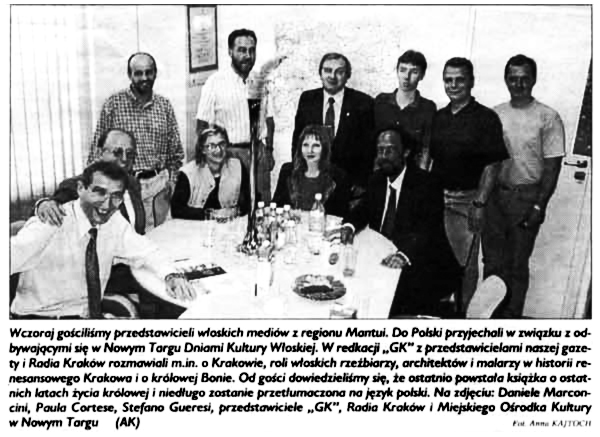 The Italian musician Stefano Gueresi pushed the audience to fantasize, with his poetic compositions. "The songs have inspired me with the most varied memories and thoughts," commented Bernward Frank enthusiastically. He and his wife accidentally saw a poster of the concert while taking a walk.

"I was impressed by the way this artist is capable of playing in such a delicate way in some moments, and immediately after in such a vigorous and powerful way. In reality it is precisely in Gueresi’s intentions to describe feelings and situations through his music. When the fingers of the 45-year-old pianist from Mantua quickly run on the keys during "Danza d’autunno" (“Autumn Dance”) it is easy to imagine dead windswept leaves.

"It was amazing to find that what you expected after reading the title of the song was promptly evoked by the music," says Bern Fohlmeister. Perhaps he expected a quieter atmosphere from "La neve e l’amore lontano” (“The Snow and the Faraway Love”) and enjoyed "Fiori nella nebbia" (“Flowers in the Mist”) very much.

Stefano Gueresi describes his music as "contemporary classical", which implies that the two elements coexist in the same form. "Very often the structures of my compositions are "classical", says the composer," but many modern elements, which sometimes echo the romantic pop-rock of the 70s, emerge among the notes. "His concert at Unna was part of the program to commemorate the 50th anniversary of the stipulation of the Italian-German treaty on job recruitment. It was certainly the beginning of a closer collaboration between Unna and Mantua, and Stefano Gueresi was accompanied on his visit by other guests from the Lombard city.

By becoming a member you will be able to contribute to the publication of CDs and...

Do you want to make a donation?

You can support the Association and its activities with a donation.